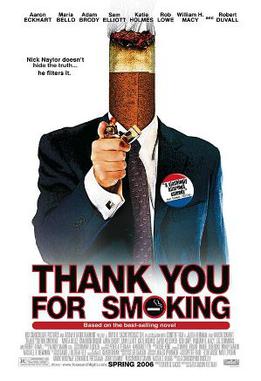 I recently watched the hilarious movie Thank you for smoking, the 2005 satirical film about a tobacco industry lobbyist, and I got to thinking about the common writer advice to create likable characters.

‘Likable’ is, I think, kind of a misnomer–it’s too close a cousin to ‘nice’. And ‘nice’, in turn, can edge dangerously close to ‘boring’. Nice friends–bring them on. Nice characters–meh.

Nick Naylor, the protagonist in Thank you for smoking, is not nice. Or how about this quote from the movie:

It’s just so wrong and yet so funny. 😀 Who could get behind him in real life? No one. Nick is the furthest thing from politically correct. And yet, the movie sucks you in and pretty soon, you’re cheering and laughing with this guy. Because, despite his moral agility, he’s just so darn charming and energetic and smooth-talking. And the fact he is those things while simultaneously representing  a cynic, dubious industry is fascinating. He is not nice. Is he likable? Maybe. Certainly he isn’t wholly unlikable. But what he definitely is, is interesting.

And that, in my opinion, is way more important.

Do you have any favorite “unlikable” protagonists?

2 thoughts on “Likable characters don’t need to be nice”